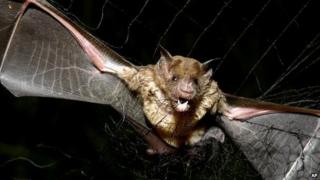 Culling vampire bats that carry rabies will not stop the spread of the virus, and could make it worse, a new study has revealed.

Rabies, a viral infection, can be passed on to a human if bitten by an animal that has the virus.

Until now it was believed reducing vampire bat numbers in South America would control rabies.

But 30 years of culling - organised killing - hasn't helped and rabies has been found in every bat colony.

Rabies is a viral infection that affects the nervous system, transmitted to humans in saliva when they are bitten by an infected animal.

Sometimes it can take months or years before a human realises they have it. By the time it is found, it is difficult to treat.

Daniel Streicker, who did the research with the bats, said: "We found that rabies is there no matter what."

"The size of the bat colony didn't predict the proportion of bats that were exposed to the virus."

To get rid of rabies in bats, the population would need to be wiped out, which is almost impossible.

It would also be bad for humans because bats eat mosquitoes and spread pollen.

The report also said that humans going into areas with vampire bat populations actually made the problem worse.