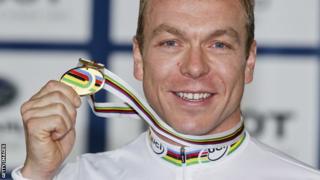 Sir Chris Hoy and BMXer Shanaze Reade are among the gold medal hopes named in Britain's cycling team for this summer's Olympics.

Eighteen riders have been confirmed for London 2012's track, mountain bike and BMX events, with 14 named on a shortlist for road cycling.

David Millar, who was banned in 2004 for taking performance-enhancing drugs, is one of the names on that provisional list under the same ruling that will allow Sprinter Dwayne Chambers to be considered.

Cycling was one of Britain's most succesful events at the last Olympics in Beijing, where they won 14 medals, including 8 golds.

Hoy won three of those golds in 2008 but could still miss out defending all of his titles.

He should be picked for the team sprint and keirin events but could miss out on the individual sprint to Scotland's Jason Kenny. He finished behind Hoy in 2008 but has improved a lot since then.

"The standard in the British Cycling team is so high and the selection process is always going to be tough, but there's a great atmosphere in the team and we just need to keep putting in the hours in training and make sure we're in the best shape possible for race day," said Hoy.

"This is my fourth Olympics, but my first home Games, and it's going to be an amazing experience and a once-in-a-lifetime opportunity for all of us."

Three-times BMX world champion Reade will hope to make up for the disappointment of crashing in Beijing when favourite for gold.

Tour de France contender Bradley Wiggins is included in the road squad, with Mark Cavendish strongly tipped to win Britain's first gold of the Games when the road race takes place on the opening Friday.