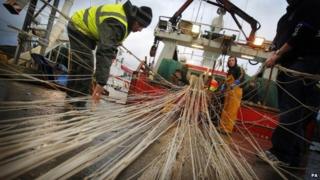 Fishermen should be banned from throwing back fish they don't need, European ministers have agreed.

At the moment, EU rules allow fishing boats to chuck any fish they've caught accidentally back into the sea.

But critics say this encourages overfishing and has led to some types of fish hitting dangerously low levels.

Now a big meeting in Luxembourg has agreed the rules should change, recommending bans on discarding mackerel and herring by the year 2014.

Bans on other types of fish - cod, haddock, plaice and sole - would come into place by 2018. These are harder to separate when fishing because they swim together.

The European Parliament and Commission now have to pass the agreement and work out the details.

Marine scientist Professor Callum Roberts told Newsround: "As time has gone on, people have developed better and celeverer ways to catch fish and to outwit life in the sea."

"And what that has done is progressively to diminish the amount of animals in the sea and it's made it harder to catch fish and there are fewer left than there used to be."