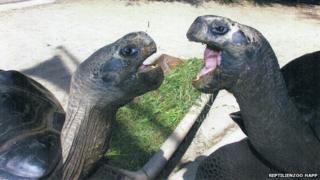 It looks like the world's longest animal romance may have come to a sad end.

Galapagos giant tortoises Bibi and Poldi have been together for 115 years, but they recently had a big fallout.

Their keepers in Austria first noticed something was up when Bibi bit off a chunk of Poldi's shell. She kept on attacking him until he was moved to another enclosure.

Experts have been brought in to try and bring them back together.

They've tried feeding them 'romantic' food and getting them to play games, but with no success so far.

The zoo's owner Helga Happ says she's very sad they don't like each other anymore and she's doing all she can to get them to make up.

She said: "They are both 115 years old - they have been together since they were young and grew up together, eventually becoming a pair.

"But for no reason that anyone can discover they seem to have fallen out. They just can't stand each other."

This type of tortoise is native to the Galapagos Islands in the Pacific Ocean and can live for up to 175 years in captivity.