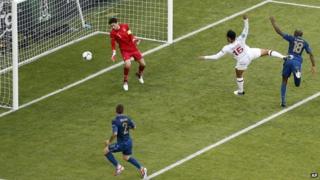 England have drawn 1-1 against France in their opening match of Euro 2012.

Joleon Lescott scored for England on 30 minutes, heading into the net from a great Steven Gerrard cross.

But they were only in the lead for nine minutes. France hit back with a brilliant curling shot from Manchester City's Samir Nasri to level the match.

There were a few more chances at both ends but at the final whistle a draw seemed like a fair result.

Captain Steven Gerrard was satisfied with their performance in Donetsk, Ukraine.

"Of course we went into the game to try and to win it," Gerrard said. "But I think if you start a competition and put a point on the board against a good side like France, we're quite happy."

England's next match is against Sweden on Friday.

Elsewhere in Group D, Ukraine pulled off a shocker by coming from behind to beat Sweden.

Andriy Shevchenko scored twice in six minutes for the co-hosts to take the final score to 2-1.