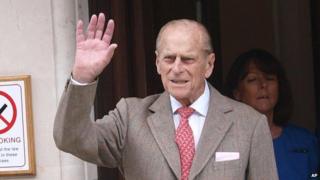 Prince Philip has celebrated his 91st birthday at home, after being released from hospital.

The Duke of Edinburgh waved as he left King Edward VII hospital in London on Saturday.

He was taken there last Monday because of a bladder infection, meaning his missed two days of the Queen's Diamond Jubilee events.

When asked by journalists if he was feeling any better, he replied: "Well, I wouldn't be coming out if I wasn't."

The duke was driven to Windsor Castle after leaving hospital.

There'll be two gun salutes on Monday at midday to mark his birthday.