Next time you get told not to play with your food you might want to think about this.

Two students at a university in America have made a piano out of bananas!

They've made a piece of kit called MakeyMakey, that can turn fruit, animals and even lumps of playdough into keyboards.

It's not available for people to buy just yet as it's still in the early stages of development. 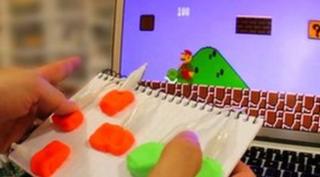 The gadget is a small board with clips on which is attached to a computer via a USB port.

The clips can be attached to anything that electricity can travel through, which then makes the object the controller.

The developers say only small currents of electricity are used so there's not safety problems.

But experts warn that people shouldn't try to make their own ones at home.

If the tests work the makers hope it could be a fun way to get more kids interested in engineering and science.