Euro 2012 kicks-off in Poland and Ukraine 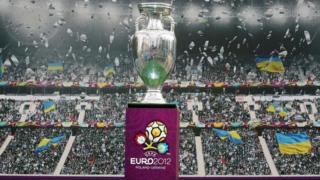 After months of waiting, Euro 2012 has finally kicked-off with co-hosts Poland taking on Greece.

Over the next three weeks, 16 of Europe's best national football sides will fight it out to be crowned Euro 2012 champion.

Spain currently hold the trophy after winning the tournament four years ago.

Spain and Germany are the favourites to win this year's competition, with Netherlands and France also thought to be title contenders.

Eight stadiums across Poland and Ukraine are being used for the matches.

England are the only team from the UK to qualify for the tournament.

They've never won the European Championship, their best result was a semi-final defeat by Germany at Wembley in 1996.

The run-up to the tournament this time hasn't been great for England with the side's top players being hit by a string of injuries and suspensions.