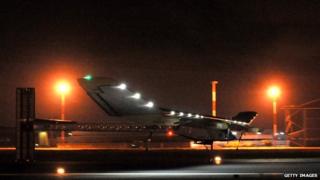 A solar plane has touched down in Morocco, making history as the first intercontinental flight powered by the sun.

The Solar Impulse used 12,000 solar cells to harness light from the sun to turn four motors as it flew from Madrid in Spain to Rabat in Morocco.

The landmark flight proves that the sun's energy is enough to keep the plane in the air, even at night.

Pilot Bertrand Piccard said, "It was perhaps the most beautiful flight of my life, I have dreamed since I was a child of flying without using fuel."

This trip is part of a rehearsal for a world tour in 2014.