Venus makes a once-in-a-lifetime move across the sun 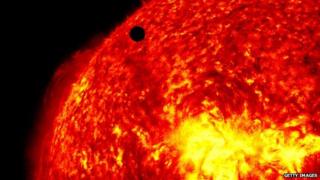 Stargazers were out in force during the night to catch a glimpse of Planet Venus move across the face of the Sun.

The transit of Venus is an extremely rare astronomical event when Venus moves between the Sun and earth.

Skywatchers across most parts of the UK struggled to see it because of cloud coverage.

But in parts of America, the Arctic, the western Pacific, and Asia people witnessed the entire passage.

Joe Cali, who saw the transit in Australia said, "It is exciting. It may look like just a black dot on the Sun but if you think about it, it's one of the few times you get to see a planet in motion."