Gary Cahill has been ruled out of the Euros 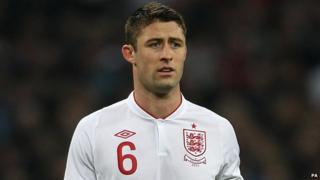 England defender Gary Cahill has been ruled out the European Championships with a broken jaw.

The Chelsea centre-half suffered the injury during his side's 1-0 win over Belgium on Saturday.

Liverpool youngster Martin Kelly has been called in to the squad as his replacement.

England have already lost a host of stars to injury including Jack Wilshere, Frank Lampard and Gareth Barry.

Cahill was substituted in the first half of England's win against Belgium after colliding with goalkeeper Joe Hart.

At first it was hoped that the injury was not serious, but x-rays revealed he had suffered a double fracture of his jaw.

Cahill had looked in line to start alongside Chelsea team-mate Terry against France in England's Euro 2012 opener, but his absence now opens the door for either Manchester City's Joleon Lescott or Everton's Phil Jagielka. 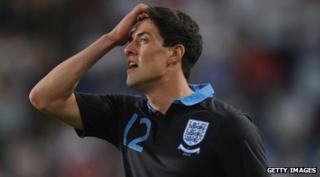 Getty Images
Martin Kelly is now the sixth Liverpool player in the squad.

His replacement, Liverpool's full-back Kelly is a surprise inclusion to the squad.

He made his international debut as a substitute against Norway last weekend, but the 22-year-old has been called up ahead of more experienced players such as Micah Richards and Rio Ferdinand.