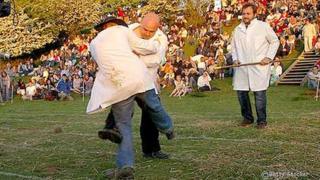 When you think of the Olympics you probably imagine athletes running the 100 meters or team sports such as basketball or hockey.

But there's another set of games taking place in 2012 which is celebrating its 400th year.

The Cotswold Olimpicks take place in in Gloucestershire and are the oldest 'modern' sporting meeting in the world, running since 1612.

Competitors take part in shin-kicking and the tug 'o war.

Other events include throwing the hammer, putting the shot and the standing jump.

The people who organise the Olimpick Games say they are part of a tradition that led to the modern Olympics.

And that the British Olympic Committee even quoted the 400th anniversary of the Games in their bid for the 2012 London Games.

Crowds of more than 5,000 are expected to watch the Olimpicks and the games will finish with a fireworks display.