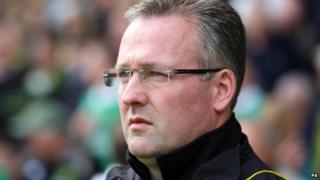 Paul Lambert has told Norwich City that he wants to step down as the club's manager.

But Norwich have refused his request because they think he wants to join Aston Villa.

The Birmingham club are hunting for a replacement for Alex McLeish who was sacked after they finished just above the relegation zone.

Norwich had a great first season back in the Premier League and the club want to keep Lambert for more of the same.