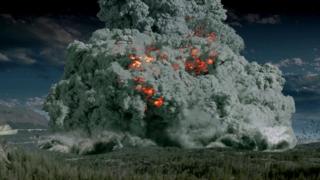 The planet's largest volcanoes may have taken as little as a few hundred years to form and erupt.

It was thought supervolcanoes took 200,000 years to develop but it's now believed it happens much faster.

Researchers at a 760,000 year old supervolcano site in California found that the magma pool beneath it erupted a few hundred years after forming.

Supervolcanoes are very rare and a super-eruption would be much bigger than any eruption ever seen by humans.

If a super-eruption happened again, the weather on Earth could change because the huge amounts of ash released could block some of the sun's rays.

At present, none of Earth's known giant magma pools are in danger of erupting but scientists still want to understand how the pools develop so they can predict future eruptions.