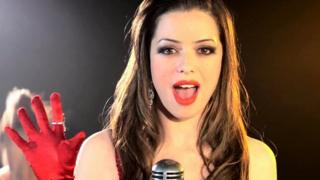 Tina is no stranger to the music scene - ten years ago she starred in a CBBC series called Viva S Club and her band had eleven top 5 hits.

Now she's stepping out alone after almost a decade working on her individual style, so will "Fire" set the charts alight?

The song starts off mysterious and orchestral, almost like a James Bond theme but before long the electronic bass kicks in.

"The actual melody is quite souly", Tina told Newsround, "but I wanted something you can really dance to."

She purrs her way through the verses and growls the choruses with her unique vocals.

Fire has a very catchy chorus and you hear something new in the mix every time.

It's familiar, like a Lady Gaga dance floor filler but isn't quite like anything out there at the moment.

The song has attracted lot of attention online and Tina has a following of very loyal fans (called Tina's Tigers!)

Fire could be heating up the charts soon.

Fire is out on 6 August.