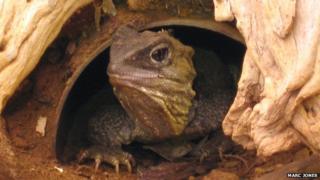 Don't get too close to this reptile - it chews its prey like no other land animal, according to scientists!

They say the tuatara from New Zealand can slice up its food using a "steak-knife sawing motion" when it munches.

This ability could be why it's been able to adapt and survive more than 200 million years.

It means it can eat a wide range of prey, such as beetles, spiders, crickets and small lizards. 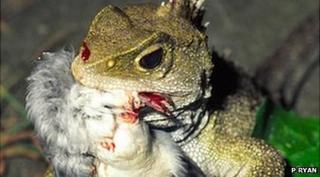 P Ryan
The tuatara's unique chew means it can eat loads of different prey, including this seabird

They found that the tuatara's lower teeth slide forward against its upper teeth to slice food apart "like a draw-cut saw".

It's different to lizards and snakes who have "more of a simple opening and closing" motion.

This discovery can help explain some of the reptile's rather gruesome habits.