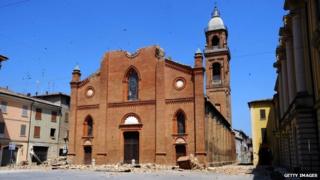 Northern Italy has been hit by another deadly earthquake - the area's second in nine days.

At least 16 people have been killed and about 350 injured by Tuesday's 5.8 magnitude tremor.

Rescue workers are searching for survivors in the rubble. A 65-year-old woman has been pulled out alive, after 12 hours trapped in her kitchen.

There are now 14,000 people who've been left homeless by the two quakes.

This quake was strong enough to be felt across Italy - as far away as places like Venice, Milan and Pisa.

People ran out of buildings and into the streets, and reports say that some roads were blocked by residents trying to flee the area.

The last earthquake on 20 May killed seven people.

Loads of churches and other historic buildings have been destroyed.

The Italian Prime Minister has promised to do everything possible to try and get life back to normal.