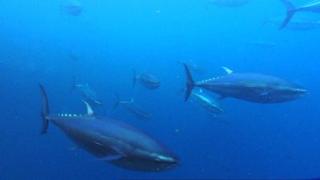 The radioactivity is carried from Japan by bluefin tuna like these

Radioactive tuna have been caught off the coast of America.

They picked up the pollution from Japan's Fukushima nuclear power plant which exploded last year.

Scientists are studying the bluefin tuna and are interested how the species can carry the radioactivity over such long distances.

They say that the fish are still perfectly safe to eat.

These tuna were born in Japanese waters and swam thousands of miles to feed in the eastern Pacific.

Scientists say that it shows that what happens in one area can affect animals on the other side of the world.