Your Diamond Jubilee celebrations over the weekend 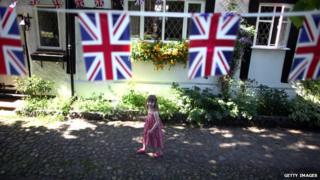 Newsround has been live in London over the four-day weekend with all the big news and stories from the Royal celebrations.

We asked what you were doing.

Some were going to street parties, others managed to get to central London. A few of you even made some some of Blue Peter's special Jubilee Jelly!

Here's what you told us:

"Today I am going to have a party with cakes shaped as the Queen's face."

"I was going to go to a street party but it got cancelled because it was raining."

"It is my birthday so me and my family are going out to have a great day to celebrate the jubilee and my birthday. Yay!"

"There has been a lot of preparation for this Diamond Jubilee. We are having a massive street party on Tuesday and are all getting involved."

"I can't wait for the concert! I am looking forward to seeing all the different acts from the Queen's 60 year reign!"

"I'm going to my grandad's to celebrate. I can't believe that if the Queen goes on for another 3 years 7 months she will be the longest reigning monarch."

"We are having a garden party with our friends. I've made a cake decorated like a crown."

"Yesterday we had a street party. I made a coaster and a plate with my name on it, and I won the raffle! It was unbelievable."

"I am singing and dancing to One Direction in the street whilst there are snacks, banners and lots of guests."

"I went to a street party in the rain on Sunday. We used gazebos to keep dry and there was a cardboard cut out of the Queen! I really enjoyed myself!"

"We're inviting our whole family to our house to watch the Jubilee concert, and we're doing a buffet for dinner, including Jubilee Jelly! Yesterday I hosted a Jubilee sleepover, and on Friday we saw the Olympic Torch in Liverpool."

"We're having a massive pary today from 3 o'clock till midnight."

"I am having a jubilee picnic with my mum, in the garden!"

"It was a fun day at the River Thames (yesterday) because I was on a boat behind the Queen and she waved at me! I was sooooooooo excited!"

"I'm in Asia (but I'm British) and we're having a garden party at the British High Commisioner's house!"

"Me and my family are going to watch the concert today. Also we are going to dress up as kings and queens as well as having more party games."

SOME OF YOUR COMMENTS FROM FRIDAY, SATURDAY AND SUNDAY:

"On Thursday 31st May, our school will be celebrating the Queen's Jubilee by hosting a Royal Garden party which will be held in the lavish, luxurious, splendid surroundings of our school grounds, aka the playground! Dressed in the colours of the Union Jack (red, white and blue)."

"Our mummy is singing at the Queen's Jubilee concert with the Military Wives Choir - we are going to watch it on TV."

"Our school is having a massive picnic for everyone including nursery! Also, Year 6 are having fish and chips tomorrow with muffins and squash! We also have to dress up as a country that our teachers have chosen and ours is GREAT BRITAIN! I am thoroughly going to enjoy it."

"We are going to do a Queen's Jubilee parade and sing songs regarding the Queen. We can dress up and have lots of fun! I can't wait!"

"My friend and I have got a stall in the Jubilee street party and we are selling cakes and drinks with the Union Jack on them."

"My school is having a Diamond Jubilee extravaganza and will include a tuck shop, games and lots of activities. There are also over 20 posters of significant events that have occurred over the past 6 decades, which include: 1969-the first man to land on the Moon, 1989-the year the world wide web was invented, 2008-Barack Obama became US president, and 2011-the year Prince William married Kate Middleton-the Duchess of Cornwall."

"We're celebrating by making Diamond Jubilee bread in school and having a street party with more than 100 people coming."

My school is having a 1950's day because she was crowned in 1952 and we have to do a dance in front of the whole school with boys. We also get to wear 1950's clothing and we are having a massive picnic at my school!"

"In our school we are going to meet Sol Campbell on Friday because of the Diamond Jubilee."

"I'm so excited about the Diamond Jubilee because we are having a picnic at our house with crown shaped homemade cookies, lovely."

"I'm going to have a massive indoor street party with my guides pack! Also my school has promised we are going to have some festive food for lunch!"

"I am going to see Queen Victoria (someone dressed up) on a horse drawn carriage!"

"I'm having a party with my street and a couple of people have replied for it. My brother, my mum and I are making a massive Jubilee cake and my grandma and her friends are bringing pictures for the party."

"My school and I will be having a party and planting a tree at the same time the Jubilee tree is planted."

"My town is doing a Jubilee carnival with parades and really fun stalls! And there is a travelling fun fair there as well!"

"Our school is going to have its own Diamond Jubilee because our school was opened in 1952 the same year that Elizabeth became the Queen, so we are celebrating 60 years of our school and 60 years of the Queen!"

"I'm celebrating by having a street party at my gran's. We're going to play 'pin-the-crown-on-the-queen'!"

"My family and friends are having a garden party, we're making bunting and we will have loads of food and games."

"We are having a garden party in school and we are going to play traditional games like croquet and pin the tail on the corgi."

"My class and our teacher have been organising a Diamond Jubilee street party for the whole school. There will be stalls and activities plus some races, it will be so much fun!"

"I'm having a Diamond Jubilee-themed birthday party and we're having a non-school uniform day at school!"

"I am going to celebrate the Diamond Jubilee on holiday in Italy with my family!"

"My school is going to dress up in red, white and blue, have afternoon tea and play British games and quizzes about the Queen!"

"I am going to Devon to celebrate with my nan and granddad."

"I'm going to London for the weekend for my uncle's wedding. But I'm going to go and watch the Queen on the River Thames as well."

"Tomorrow is our school' s Jubilee party where we all have to dress up in red white and blue! Also my class are having a sale, selling fruit cups."

"Our neighbourhood is having a street party with bunting and a BBQ. We can't wait!"

"Our school is having a party in the playground, with British food. Everyone has to dress up as kings or queens."

"We're having a street party at our school! We're creating bunting and flags and everything!"

"My school is having a Jubilee garden party on Wednesday. Our whole playground is full of decorations and many of us will be performing at the garden party."

"It's my birthday and I am having a Jubilee themed birthday party."

"At school we are going to be having a street party and I am so excited!"

"My school is having a non-uniform day where we will wear red, white and blue to represent the Union Jack. Also we are going to fly kites that we made ourselves, which have the Union Jack on. This will be the best event that has ever happened in my whole entire life. I can't believe that the Queen has ruled England for a fabulous 60 years!"

"For the Queen's Jubilee I am going to a fayre at Norfolk park with my family and friends."

"Our school is going to have a street party."

"We are going to be having a street party and I am so excited! There is going to be a 'pin the crown on the Queen' competition and lots of yummy food!"