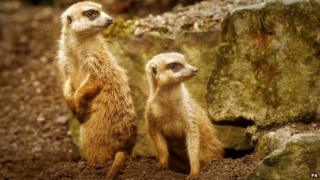 Loads of us saw the cute meerkats on Planet Earth Live, but scientists say some of them are in danger.

They're not always under threat from other animals - it's members of their own family they need to watch out for!

European experts watching 2,000 meerkats in South Africa discovered about half of them mate with relatives.

Called 'inbreeding', this can stop baby pups from being healthy, and some may not survive.

The study lasted 20 years, with records being kept of births, deaths and the movement of meerkats between groups.

Newborn pups were weighed and measured, and details were noted of which family groups they were from.

The pups that were born from inbreeding turned out to be smaller, lighter in weight, and less likely to stay alive in the wild. 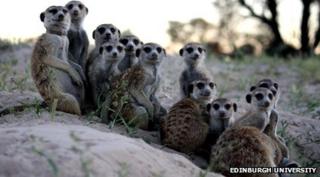 Edinburgh University
Meerkats live in groups of about 50

But the inbreeding wasn't between close relatives like brothers or sisters.

It was between more distant relatives - maybe like cousins - who didn't know each other very well.

Johanna Nielsen from Edinburgh University, who wrote the scientists' report, says: "This doesn't mean meerkats are going to become extinct."

"But they need to avoid mating with their relatives if they want to have the most healthy pups," she adds.