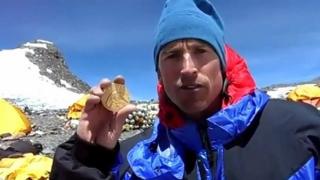 British mountaineer Kenton Cool has completed his mission to take an Olympic gold medal to the top of Mount Everest.

The medal was awarded to the 1922 British Everest expedition, who promised it'd be taken to the summit.

But the climbers never reached the top because there was a huge avalanche. So Kenton decided to honour the vow.

He said: "This promise needed keeping and after 90 years the pledge has been honoured for Britain."

"To stand on the summit for the 10th time is simply amazing," Kenton added. "To have with me an Olympic gold medal awarded to the 1922 team is humbling."

He has conquered the world's highest peak more times than any other Brit.

Kenton and his team spent around 30 minutes at the summit before starting their descent.