Should schools have public speaking lessons? 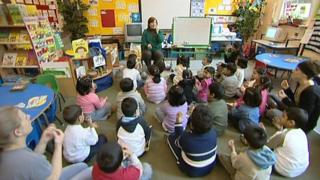 Everyone at school should be given lessons in public speaking and job interview techniques, according to politician Stephen Twigg.

He's in charge of education ideas for the Labour party - though they aren't in power so can't control what happens in schools at the moment.

He reckons training in communication skills would help pupils compete with kids who have been to private school.

The national curriculum's under review and there'll be changes by autumn 2014.

Although some state schools do run speaking classes, Mr Twigg thinks they should form part of the national curriculum.

He said he wants "all pupils to have the same opportunities to develop their verbal communication and presentation skills."

We asked you if you thought speaking lessons should be taught in schools.

"Speaking should be taught in schools because some people are really shy and talking is a good skill that everyone should know."

"I think this is a good idea because it will encourage children to speak their thoughts, but I'm afraid it could be wasting time that could be used for more important lessons, like Maths for example."

"I think public speaking is important as you need those skills to state your opinions and views. I don't think it should be a lesson for which you take an exam, but it should be included in social ethics and citizenship classes."

"We recently held a public speaking competition in our school. I think it is a great way to learn new skills and build confidence."

"If schools had lessons that were specific to speech skills it could help children become more confident and there's more chance they'll stand up for themselves against bullying."

"I agree with Katy from Preston, we don't need a whole lesson for public speaking, but it would be a good idea for it to be included in the curriculum."

"I think this is a good idea because it would help to improve our communication skills."

"I think it is a super idea because it can help us in later life. Also, we need these skills to helps us stand up for what we believe in and get a job in the future."

"I think they should have public speaking lessons, because it's an important experience and would give children confidence for other lessons like Maths, English and Science."

"I disagree because we already talk when we answer questions in class."

"I don't think it's a good idea because we have too many lessons already."

"I think it is a fabulous idea. At my school we have had several speaking assessments, but I would love to have lessons about how to speak in front of large crowds because I think it is a skill that you will need throughout your life. To be able to speak well in front of an audience improves your confidence and helps you get a job when you're older."

"I think public speaking lessons are a great idea because it's an important skill in life."

"I think it's a great idea because getting a job will be much easier!"

"I don't think we need a whole lesson dedicated to this because the majority of students have good communication skills. For those who are less confident, maybe there could be an after school club for them?"

"I don't think we should have speaking lessons because we learn how to read and speak properly in our English lessons."

"I think schools should have public speaking lessons because lots of people get nervous when speaking in public. These lessons could make people braver."

"I don't think we should be taught to speak in school because we already learn these skills in other lessons, like drama."

"I think speaking should be taught in schools as it would help to build your confidence and give you skills for later in life."

"I don't think there is a need for a whole lesson on communication skills, but all schools should encourage public speaking as part of other lessons."

"I agree, because if you don't give a good job interview it will be harder to get a job when you're older."

"I think this is a great idea! Private schools have lots of advantages so this is a good way to create equal opportunities!"