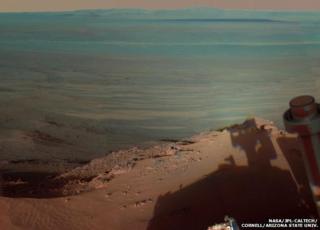 Just a late afternoon hanging out on Mars by the Endeavour Crater.

This is the stunning view snapped by US space agency Nasa's Opportunity rover at the end of its 2,888th day on the Red Planet.

It's still sending back amazing pics more than eight years after landing on the Red Planet.

Its mission was originally only supposed to last 90 days!

The picture you see is actually made of about a dozen smaller images taken by the rover's panoramic camera.

In the bottom right corner you can even see Opportunity's shadow!

The view is presented in false colours to highlight the crater's different features, such as the sandy ripples and dunes on the floor.

Opportunity's been studying the western rim of the Endeavour Crater since arriving there in August 2011.

This image was taken back in March but has just been released by Nasa.