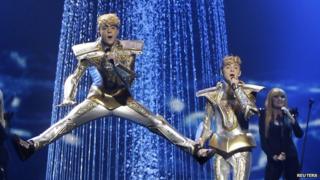 Irish duo Jedward have done it again - they've made it into the Eurovision Song Contest final for the second year running.

They're among the 10 acts from Tuesday's semi-final to go through to Saturday's final in Baku, Azerbaijan.

The twins' performance of their song Waterline included a giant fountain on stage, but no trademark quiffs!

John and Edward admitted afterwards they were worried "people might not recognise us without our hair".

They were the last act to discover they'd made it through - and celebrated by doing cartwheels to the stage! 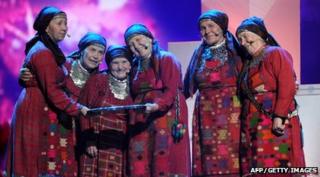 AFP/getty images
Russia's Buranovo Grannies also made it through

The 10 finalists were chosen using a combination of viewer votes and expert 'juries'.

The second semi-final on Thursday evening will decide the remaining 10 spots in the final.

The UK automatically qualifies as one of the 'Big Five' countries that give the most money to the contest.