Climbing Mount Everest is by no means an easy task. Read our guide on how you reach the summit of the world's highest mountain - all 8,848 metres of it!

Preparing to scale Everest takes a lot of training - up to two years is recommended to make sure you're fit enough.

This includes climbing other mountains, as well as more common exercises such as running (wearing a heavy rucksack) and weight training.

Mountaineer Alan Hinkes is the first Briton to conquer all 14 of the world's highest mountains, including Everest.

He told Newsround: "It's best to gain climbing experience, develop your stamina and learn skills such as how to use an ice axe and crampons."

Quiz: Test yourself about Mount Everest

Alan says that when you get to Everest base camp, you have to spend around four weeks "acclimatising" - that's getting used to the extreme altitude.

The base camp is 5,300m above sea level, so the air is much thinner. There's less oxygen, which makes it harder to breathe.

During this time, climbers gradually do longer and longer climbs from base camp, before going for the summit. 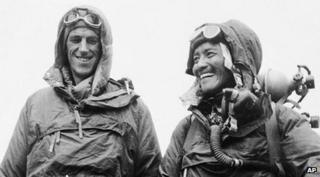 You'll need quite a bit of special equipment to get to the top. This includes ice axes and boots with crampons (sharp spikes) - these take some getting used to.

"You have a special suit filled with down feathers - it's the lightest and most efficient way of keeping you warm," explains Alan.

"You need eye protection or you'll go snowblind because there's so much ultraviolet light. It basically means your eyeballs get sunburnt and you can't see."

Other things to pack are a harness, bottled oxygen, thermals, gloves and several pairs of socks.

You'll need a permit from the Nepalese government if you want to climb Mount Everest. Anyone can get one but they're very expensive.

A big concern for climbers is altitude sickness, which can lead to acute mountain sickness (AMS). That's when your blood becomes thicker and you can suffer a clot or stroke. If you don't descend it can be fatal.

Other hazards include frostbite - which can lead to you losing fingers and toes - and hypothermia (when your internal body temperature drops to a dangerously low level).

Some people have been known to freeze to death. 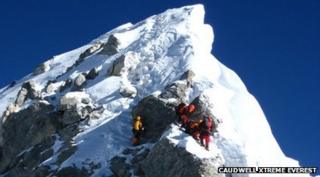 The Death Zone is the part of climb that's higher than 8,000m - it gets its name because there's so little oxygen up there that nothing can live for long. At this point getting to the top is a race against time.

Alan remembers his time spent there: "The Death Zone is like having a really bad headache, suffering from the flu and trying to run a marathon - in a blizzard."

The most common way of climbing Everest is by joining an expedition with guides. But this can be really expensive - a trip up can cost around £50,000! So you'd better start saving...