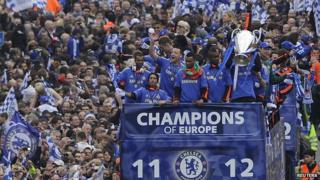 Chelsea have been celebrating after winning the Champions League for the first time on Saturday.

Thomas Mueller's late header put Bayern Munich on the brink of victory but Didier Drogba levelled things up to 1-1 forcing the game to go to penalties.

Drogba shined again in the penalty shoot-out by scoring the winning goal taking his side to a 4-3 lead - and the trophy.

On Sunday the Blues went on an open bus victory tour of in London.

Chelsea are the first London side to win the European competition and a only the second team to win the FA cup and Champions League in the same season.

Sky Brown: 'I just want to inspire girls around the world'

Most Covid rules to end in Scotland from 9 August