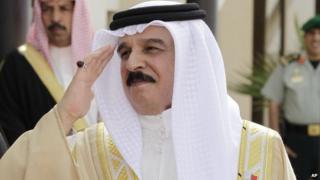 The Queen has been criticised for inviting the King of Bahrain to an important lunch party.

He is accused of using violence against protesters in his country, who are angry about how he's running things.

Hamad bin Isa Al Khalifa is one of the guests at the gathering of kings and queens at Windsor Castle on Friday, to celebrate the Diamond Jubilee.

Human rights demonstrators are expected to protest outside Bahrain's embassy in London.

Swaziland's King Mswati III is another controversial guest at the event.

He is accused of living in luxury while his people go hungry.

The lunch will be followed by an evening banquet, hosted by the Prince of Wales and the Duchess of Cornwall, but not all the monarchs will be at both events.

HM The Sultan and Yang Di-Pertuan of Brunei

HM Queen Margarita of the Bulgarians

HM King Constantine of the Hellenes

HM Queen Anne-Marie of the Hellenes

HM The Emperor of Japan

HM The Empress of Japan

HM The King of the Hashemite Kingdom of Jordan

HM Queen of the Hashemite Kingdom of Jordan

HRH The Grand Duke of Luxembourg

HRH The Grand Duchess of Luxembourg

HSH The Prince of Monaco

HSH The Princess of Monaco

HM The King of Norway

HM The Queen of Norway

HM King Michael I of Romania

HM The King of Sweden

HM The Queen of Sweden

HRH The Crown Prince of Thailand

HM The King of Tonga

HM The Queen of Tonga

HRH The Crown Prince of Yugoslavia

HRH The Crown Princess of Yugoslavia