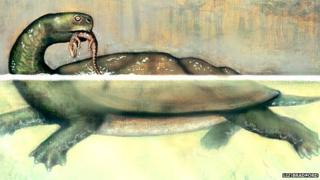 Fossils found in South America are from a giant turtle with massive jaws, powerful enough to eat a crocodile, experts say.

The fossils showed the turtle's skull measured 24 cm, bigger than a human head.

And its shell was 172cm long, about the average height of a grown man.

"We had recovered smaller turtle specimens," said Edwin Cadena from North Carolina State University, who discovered the fossil in Colombia.

"But... I realized that this particular turtle was the biggest anyone had found in this area for this time period."

Smaller turtles existed at the same time as dinosaurs, but this giant version appeared five million years after dinosaurs had vanished from Earth.

This was around the same time that giant snakes - such as the huge Titanoboa - existed in the same parts of South America.

It would have been able to eat anything from fish to crocodiles.

So big it couldn't be eaten

"It's like having one big snapping turtle living in the middle of a lake," said Dr Dan Ksepka.

He said it survived the dinosaurs partly because it was so big, other predators wouldn't have been able to eat it.

And its huge size also meant it could eat smaller creatures, so it always had plenty of food available.

Dr Ksepka added: "Smaller crocs would have been easy prey for this behemoth."

The paleontologists have named it "coal turtle", because the fossils were discovered in an old coal mine in 2005.