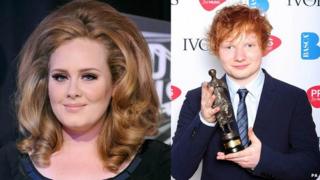 Adele has been named songwriter of the year while Ed Sheeran has won a Best Song award.

Adele's song Rolling in the Deep was the 'most performed work' of 2011 and Sheeran's The A-Team was named best song for its music and lyrics.

The annual Ivor Novello awards - in their 57th year - are very important in the music industry because they are voted for by songwriters and composers.

Adele has so far achieved global sales of 18 million for her second album 21.

There was also an award for Take That, led by X Factor judge Gary Barlow, who were honoured for their outstanding contribution to British music.

Gary told the audience: "There's nothing like winning an Ivor as a songwriter."

Ed Sheeran said he was shocked to win his Ivor Novello award for best song musically and lyrically for The A Team because he was convinced Adele would win!