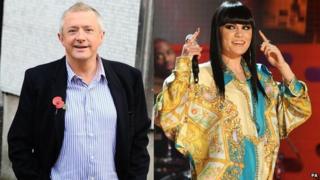 Walsh criticised Will.i.am for wearing a "silly glove" and had a pop at the way the Black Eyed Peas singer spells his name.

But Jessie has hit back saying the standard of singing on the show is better than on X Factor.

She said: "I think you should always be respectful of other people. Louis you're a nice guy. Just keep it nice."