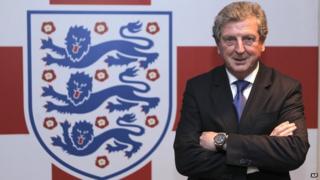 The big surprises were the inclusion of Liverpool striker Andy Carroll and Arsenal winger Alex Oxlade-Chamberlain.

Chelsea's John Terry has been included despite being stripped of the captaincy in February, but Rio Ferdinand has been left out.

Other players not going include Tottenham's Kyle Walker and Man City's Micah Richards. Steven Gerrard will be captain.

Wayne Rooney will travel to Poland and the Ukraine even though he's suspended for the first two games of the Euros.

His Man United team-mate Danny Welbeck has also been picked and uncapped Norwich keeper John Ruddy also gets a place.

Speaking about his squad at a press conference at Wembley Hodgson said the decision to leave out Rio Ferdinand was purely a football one.

There had been suggestions that he'd been left out because of a feud with fellow defender John Terry but Hodgson said:

"I respect Rio as a player and as a person and the decision was purely a footballing one."

Hodgson also said Alex Oxlade-Chamberlain and Phil Jones were included because of their ability to play in several different positions.

England now have two friendly games against Norway and Belgium before their first game of the tournament against France on June 11.