Demi Lovato and Britney Spears to judge US X Factor 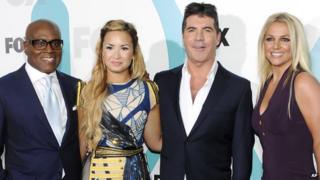 Demi Lovato and Britney Spears will be judges on the new series of the American X Factor.

The singers will work with Simon Cowell and L.A. Reid when the next series of the hit US show starts later this year.

Demi said "I'm excited to represent my generation and I'm ready to find the winner."

Her new co-judge Britney is also pretty excited, saying: "It's going to be so much fun and so different from anything I've ever done."

They'll replace Paula Abdul and Nicole Scherzinger, who left after the last series.

The new host of the show is yet to be announced, but X Factor master Simon Cowell has said: "We're going to make this the best series we've ever made."