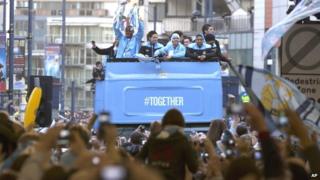 Tens of thousands of fans lined the streets of Manchester to see the football stars and their trophy.

It's the first time in 44 years that City have won the league.

Manager Roberto Mancini told the crowd: "We should be proud of these players because they did everything for you."

But the club have had to say sorry to Manchester United boss Sir Alex Ferguson after Carlos Tevez held up an offensive flag while on the bus.

School uniforms to be made more affordable