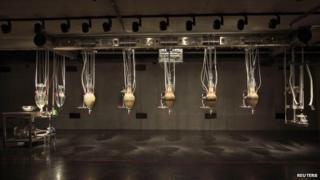 A machine that poos has gone on show at a museum in Australia.

The artwork is a series of glass containers which act like a human stomach.

Food is put in twice a day which is then digested and comes out the other end!

The smell is so powerful that not many visitors can take it!

The poo machine was built by Belgian artist Wim Delvoye, and it's not the first time he's made one.

'The Cloaca Professiona' is in a series of at least five similar works.

This one is on show at the Museum of Old and New Art in Tasmania, and another one is heading to the Louvre in Paris soon.