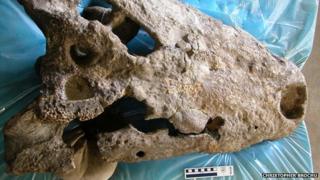 A new species of ancient crocodile that was big enough to eat humans whole has been identified.

It lived between 2 to 4 million years ago in Kenya, East Africa, and may have been more than 8 metres long!

"It's the largest known true crocodile," said Christopher Brochu, Associate Professor at the University of Iowa. "It lived alongside our ancestors and it probably ate them."

He discovered the Crocodylus thorbjarnarsoni when examining fossils. 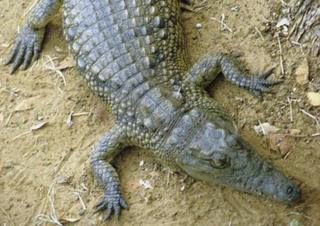 The species looked like the Nile crocodile, but was even bigger!

There's no evidence in the fossils to prove that the croc definitely did feast on humans.

But Assistant Professor Brochu explained: "We don't actually have fossil human remains with croc bites, but the crocs were bigger than today's crocodiles, and we were smaller, so there probably wasn't much biting involved."

He also points out that there would have been many opportunities for crocodile encounters, as our ancestors needed to get water from rivers and lakes.