Liberty rocket to launch astronauts into space in 2015 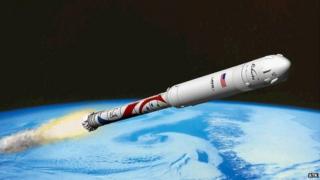 A new rocket system that would allow America to send their own astronauts into space again has been completed.

Liberty has been developed by a private US company called ATK, who made the side boosters for Nasa's space shuttles.

It would be sold to Nasa, who have been relying on Russian rockets since they ended their shuttle programme last year.

The first crewed Liberty flight is expected to blast off in 2015.

Other companies are also working on systems to carry astronauts into space but Nasa has yet to announce who they're going to choose. 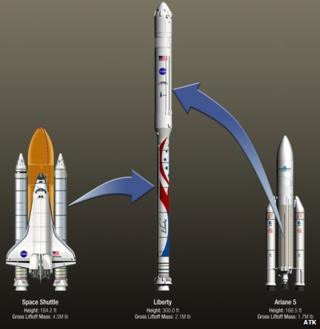 ATK
The two parts that make up the Liberty rocket

The Liberty rocket is made up two main parts - the Nasa space shuttle's side booster and the core from European rocket Ariane 5, which is mainly used to launch satellites.

A capsule to carry a crew of astronauts would sit on top of Liberty.