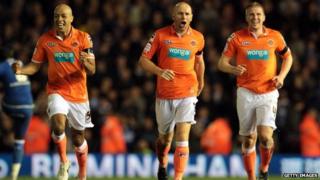 Blackpool are heading to Wembley for a chance to win a place in next season's Premier League.

A 2-2 draw against Birmingham was enough for them to reach the Championship play-off final, after leading 1-0 from the first leg.

Stephen Dobbie and Matt Phillips put the Tangerines two goals up but Birmingham fought back to bring the game level.

Blackpool managed to hang on though, to set up a showdown with West Ham on 19 May.

Whoever wins that game will join Reading and Southampton in the top division.