Orcas hunt grey whales off the coast of California as they travel to find food.

But now group of humpback whales have been filmed trying to save a pair of grey whales from a deadly attack.

The pair were spotted being hunted by a group of orcas, or killer whales, off the coast of America.

A group of humpback whales swam round the smaller whales making loud calls and slapping their fins against the water.

The BBC film crew who captured the drama think the bigger whales were trying to distrupt the killer whales and save the mum and baby grey. 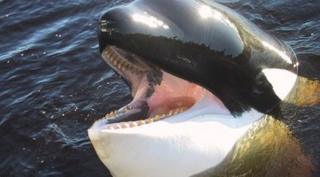 They weren't able to save the baby, but the mother managed to safely escape the attack.

Grey whales travel in big groups along the west coast of America to find waters with more food for their babies, called calves.

These groups are often targeted by killer whales, because the smaller young whales are easier to catch.

In most areas of the coast the water is really shallow so the whales are safe from predators.

But in a spot called Monterey Bay near California, the water is deeper so it's more dangerous.

It's at Monterey Bay that orcas often try and attack grey whales, and that's why a film crew for wildlife series Planet Earth set up there - to try to film the hunt.

They were told by another boat that a mother and calf were being hunted by Orcas.

And when they started to film they were amazed by what they saw. 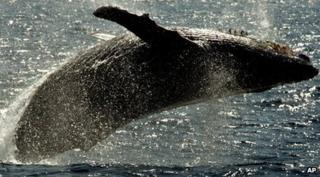 AP
Experts were surprised to find humpback whales trying to defend the calves of other types of whale.

"It was a massive stroke of luck when we received the call about the attack... we saw a lot of grey shapes in the water and quickly realised they were humpbacks," said Victoria Bromley who was part of the crew.

When the humpbacks started to make lots of noise and splashing, it's thought it was to try to save the grey whales under attack.

"I have never seen anything like this before... The whales [we watched] should have been off feeding; instead, they deliberately stayed in our area, loudly announcing their presence," said Alisa Schulman-Janiger, a whale expert who was on the boat with the film crew.

She thinks that seeing the baby under attack upset the humpback whales, even though they were a different species of whale.

"Female humpback whales would be expected to react much more strongly to the protection of a youngster... This was not a curious approach by these humpback whales: they seemed truly distressed," she said.

Even though only one of the pair managed to survive, it's an amazing discovery that whales should try and protect another species.