Differences between the House of Lords and House of Commons 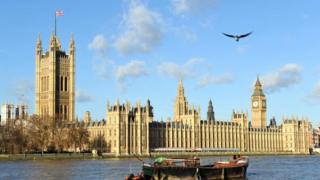 The big decisions that affect how the country is run are made in the House of Commons and the House of Lords.

These form the Houses of Parliament, and both do similar work like making laws and debating important issues to do with how the country is run.

Usually the decisions made in one House have to be approved by the other.

Who's in the House of Commons?

The members of the Commons are voted for by the public.

The country is divided into regions and each one has a Member of Parliament (MP) who represents that region. 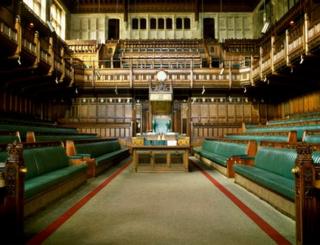 The House of Commons with its familiar green benches

It's also where the Prime Minister David Cameron and his advisors like the Chancellor, George Osborne, work.

Members of the government's opposition are there too.

The government and its opposition meet to debate the big political issues of the day and discuss proposals for new laws.

The Commons is responsible for making decisions about money, like changing taxes.

The House of Lords can discuss these changes and suggest alterations - but it can't block them.

Who's in the House of Lords?

There are about 780 members of the House of Lords and they're not currently voted for by the public.

Sometimes people inherit their status as a Lord from their family. There are 92 of these hereditary peers currently in the House of Lords.

Others are specially chosen by the prime minister because they are experts in their field, like Lord Alan Sugar who was chosen by Gordon Brown's Labour government to help people establish businesses.

The prime minister recommends that someone be made a peer, and the Queen appoints them.

The House of Lords debates new laws proposed by MPs, and makes suggestions about changes to those laws.

If they suggest changes, the law then goes back to the House of Commons where MPs discuss the changes.

When both Houses agree on the law, the Queen then approves it.