'Ghost town' being built in US to test new technologies 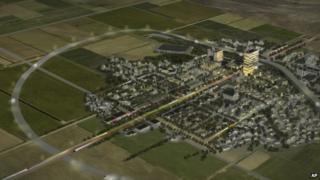 A 'ghost town' is being built in America to test out the latest technologies such as renewable energies and terrorism security systems.

It'll look just like a city with roads, houses and buildings - but no one will live there.

Scientists want to use it to see the effects of new technology in a 'real world' setting.

It's being built in Lea County, New Mexico, and will cost around £600 million.

Big tech company Pegasus Global Holdings is behind the project.

Anything from smart grids and next-generation wireless networks to self-flushing toilets could be tested in the new town.

"The only thing we won't be doing is destructive testing, blowing things up - I hope," said Robert Brumley from Pegasus.

Work is due to begin on the town at the end of June.