Liverpool get revenge on Chelsea with 4-1 victory 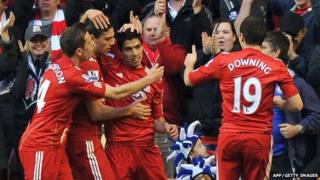 Liverpool got their own back on Chelsea after beating them 4-1 and dashing the Blues' hopes of a top four finish.

The victory comes just three days after their FA Cup final defeat to Chelsea on Saturday!

The hosts were three ahead by half-time, thanks to an own goal by Michael Essien, plus two more from Jordan Henderson and Daniel Agger.

Ramires pulled one back for Chelsea after the break, but Jonjo Shelvey took the final score to 4-1.

Liverpool have only won six of their 19 home games this season.

It was a much-changed Chelsea side from their FA Cup final.

The only way for Chelsea to qualify for the Champions League now is to win their final against Bayern Munich.