A paralysed woman has completed the London Marathon after 16 days with the help of a 'bionic' suit.

Claire Lomas was paralysed from the chest down in a horse-riding accident in 2007 and did the marathon to raise money for charity.

She said: "It was really emotional and I couldn't believe the support - I'm still in shock really."

Her suit is fitted with motion sensors and allows Claire to walk by detecting shifts in her balance. 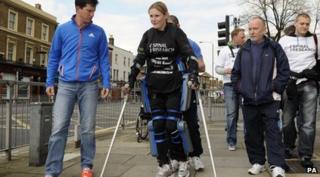 As she leans forward to take a step, the suit senses her movement and starts to move her legs for her.

Claire was met by cheering crowds as she walked beneath an arch of red balloons.

So far she has raised about £80,000 for Spinal Research, a charity which helps to find treatments for people with back and neck injuries.

Unlike most of the other 36,000 London Marathon runners, Claire didn't get an official medal for finishing.

Organisers say only those who finish the race on the same day can get one.

But she will go down in history as the first person to do the marathon in a 'bionic' suit!