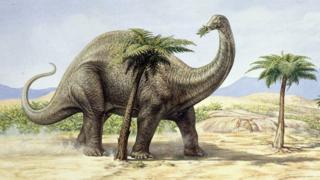 Giant dinosaurs could have warmed up the planet by breaking wind, say researchers.

British scientists have calculated the amount of gas, called methane, which would have come from the massive dinosaurs called sauropods.

They studied farts made by cows, and then calculated the gas they'd produce if cows were the size of dinosaurs.

They worked out dinosaurs would have parped out 520 million tonnes of gas every year.

The experts, from Universities in Liverpool, Glasgow and London, studied not just the giant dinosaurs, but the tiny microbes inside them.

Dr David Wilkinson said: "Actually it is the microbes living in the dinosaurs guts that are making the methane."

Methane is known as a "greenhouse gas" that absorbs radiation from the sun, trapping it in the Earth's atmosphere and making temperatures go up.

Dr Wilkinson and his colleagues said the dinosaurs' farts could explain why the Earth's climate was so much warmer 150 million years ago.