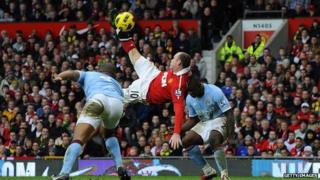 It's official - Wayne Rooney's spectacular overhead kick has been voted the best goal ever scored in the Premier League.

Rooney's spectacular strike beat nine others from the likes of Dennis Bergkamp and Thierry Henry, which came second and third.

Fans from all over the world voted for the award.

It was created to celebrate the 20th season of the Premier League.

David Beckham won the Goal of the 10 Seasons Award in 2002 for his amazing strike from the halfway line against Wimbledon.