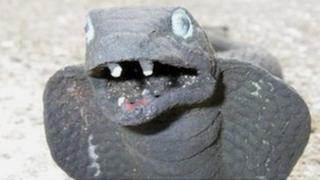 For lots of people, finding a snake in their garden is their worst nightmare.

So imagine what went through the mind of one man in Birmingham when he spotted a giant cobra.

He saw the 60cm monster on his patio and gripped by fear, rang the RSPCA straight away.

The only problem was, when the crew out turned up to tackle the terror, they saw it was a rubber toy snake!

It's thought the man was so scared by what he thought was a giant cobra, he couldn't bear to get near enough to spot it was a toy.

RSPCA inspector Jonathan Ratcliffe was the man who showed up to reveal it was fake.

"I couldn't believe my eyes, because it didn't look real in any way... The man was petrified and really genuine in his fear of snakes and therefore hadn't gone close enough to realise it wasn't real. He couldn't stop apologising for his error," he said.