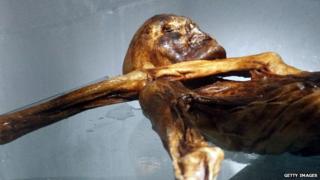 Scientists say they've discovered the oldest blood in the world after finding the frozen body of a 5,000 year old man in Italy.

The man, called Oetzi, was found in ice in the Italian alps way back in 1991.

It's thought he walked the earth about 5,300 years ago, and researchers have now found tiny bits of blood on his body.

Those bits, or cells as they're known, are thought to be the oldest ever discovered.

It's a great find for scientists who can now find out if blood was different back then to how it is today.

Oetzi was in really good condition because he'd been buried in ice for so long and his body had been preserved.