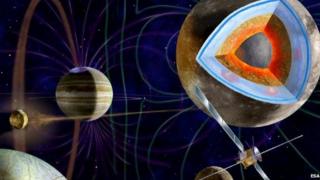 Experts at the European Space Agency are expected to give the go-ahead to a major new space mission to the planet Jupiter.

The billion-dollar misson will see a probe called 'Juice' (JUpiter ICy moon Explorer) travel to the planet and it's icy moons.

It'll take until the year 2022 to build and once it's launched it will take EIGHT YEARS to reach it's destination.

Jupiter is the biggest planet in our solar system.

It's thought to have at least four moons and the new mission aims to find out if any of them have the right conditions to support life.

The spacecraft would use the gravity of Jupiter to fly close to two of the moons, called Callisto and Europa.

It would then settle into an orbit around Jupiter's third moon, thought to be the biggest moon in our solar system, called Ganymede.

Experts reckon all three moons could have oceans of water below their icy surfaces. 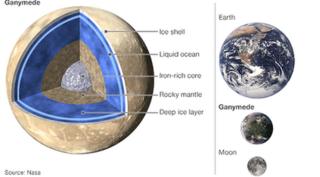 On the left is what experts reckon Ganymede is like, and on the right is how it compares in size to Earth and the Moon.

The makers of Juice have been in a competition with other designers.

Only one design will get the go-ahead from the European Space Agency, and reports say it's probably going to be Juice.

The other ideas in the competition were 'Athena' - the biggest ever X-ray telescope - and 'NGO', a plan to put three new satellites in space to detect gravity.