Bees fall out with members of their own family 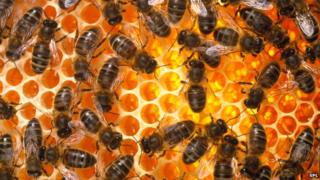 A new study of bees reveals some of them refuse to look after members of their own family.

It's the job of the worker bees to look after the queen and to raise her babies.

But when the queen of the colony changes, instead of looking after the new queen's babies, the bees will sometimes have their own!

The research studied groups of bees that had recently moved home, or 'swarmed'.

Every group (or colony) of bees has one queen. It's her job to make the eggs that produce all the other bees in the group.

But the study which took place in Poland, has found that when the queen changes - worker bees sometimes rebel. So instead of raising the queen's eggs, they'll make their own and raise their own children.

What the research has found changes the way experts think about bees. Before this people thought that a colony of bees work together all the time - but now it's been discovered that some of them are rebels!