Are beavers breeding in the English countryside? 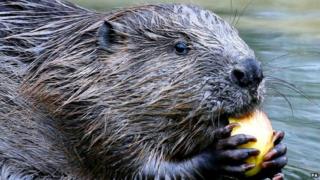 Beavers are believed to be breeding in the wild in England for the first time in 400 years, after one was found in Cornwall.

At first it was thought to be Igor, a big beaver who escaped from a farm three years ago but it can't be him, as it is half his size.

That's led experts to think there are other beavers in the English countryside and they could be breeding.

George Hyde of Dartmoor Zoo said, "He's the size of a medium dog."

Beavers were wiped out in the UK by humans in the 16th century, mainly for their fur.

Scottish wildlife groups re-introduced them to the wild three years ago but in England beavers are only found in captivity. Until now.