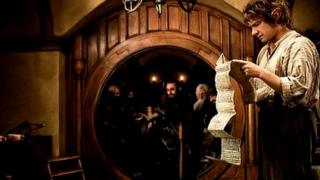 Film director Peter Jackson has given a 10 minute sneak preview of "The Hobbit" movie at a special screening in Las Vegas.

He wanted it to look true to life and less like a film.

Peter used cameras that film twice as many shots per second than normal movie cameras - 48 frames a second, rather than the usual 24.

But not everyone in the audience liked the film's new look, saying it looked cheap, "Like a made-for-TV movie."